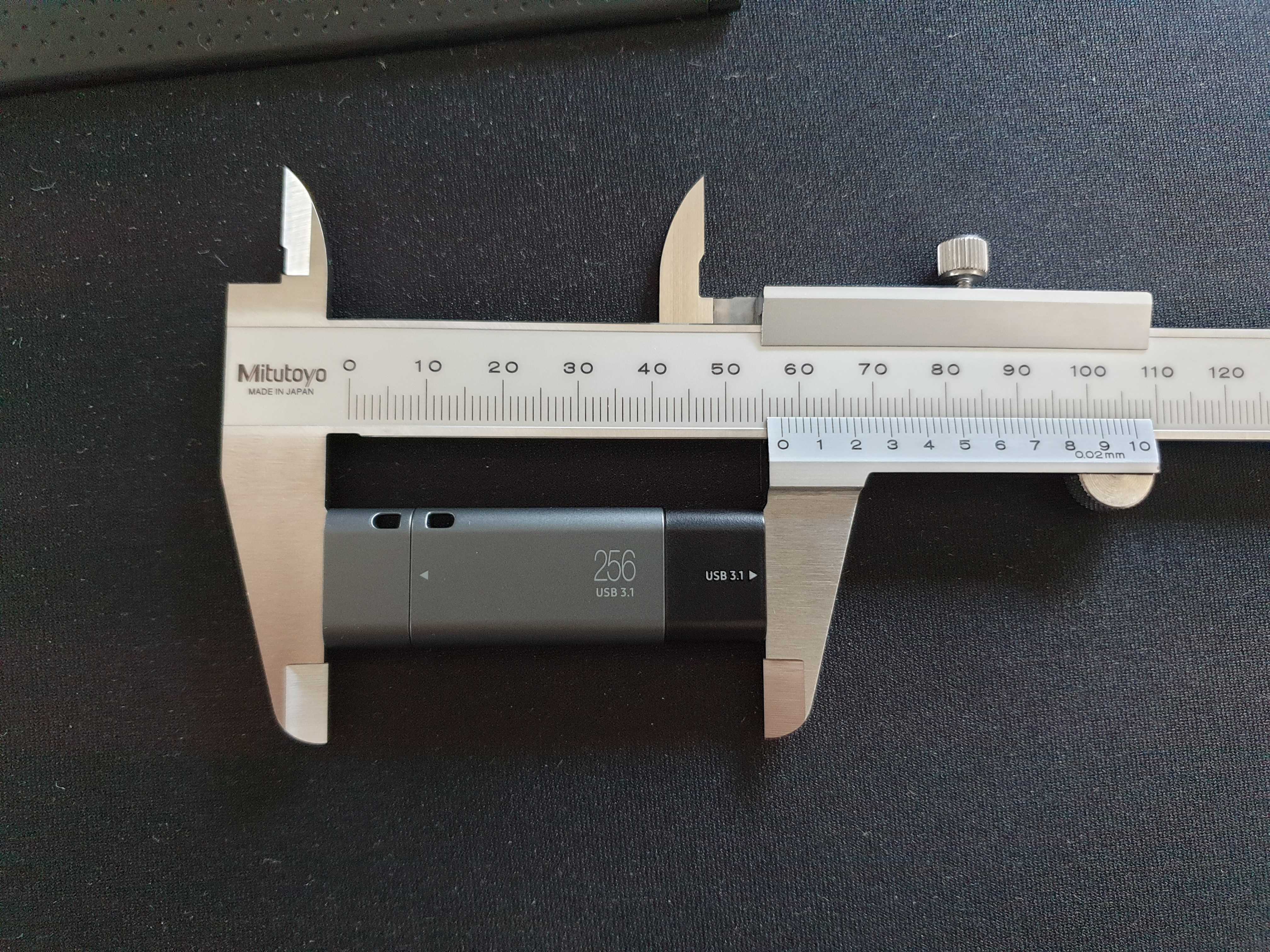 With flash storage, you need to be careful of fakes, so it's always good to perform a couple of tests before use. You want to make sure that the drive can be filled to capacity - fakes sometimes lie to the OS about their true capacity, so they will fail to fill past some point. You also want to make sure that the sequential read/write speeds come somewhere close to what is advertised. For this drive, read speeds of up to 400MB/s are advertised, but write speeds are not advertised.

I did some googling prior to purchase and found that for the 256GB capacity drive, a sequential write of 120MB/s was found by other users. Note that both the read and write speeds are expected to change with drive capacity, with the larger drives performing better. This is true for all flash storage. E.g. You expect a 1TB SSD to perform much better than a 256GB SSD of the same model. This is because larger drives often address multiple memory chips in parallel, whereas the smaller drives usually have fewer memory chips, or even just the one. Going back to this specific drive, some googling tells me that the 32 and 64GB models have write speeds of around 35MB/s, so I would expect the 128GB model to be around 60MB/s, but I've found no data on that variant.

The first thing I did was perform a full format to NTFS prior to testing; the format was to ensure the drive was clean and fully write-able, and NTFS was chosen for consistency with my other storage. Formatting took about 36 minutes and Task Manager showed a mostly-steady 120MB/s write speed throughout.

USB standards are a bit confusing as the naming schemes have changed several times. Here is the relevant information, with the current official name on the left, and the previous names to the right:

For simplicity's sake, I'm going to use the original naming schemes of USB 3.0 and USB 3.1, because they are much simpler than the newer ones.

Tests will be performed using a combination of USB 3.0 Type-A, USB 3.1 Type-A, and USB 3.1 Type-C. As you will see, these results can differ, even though USB 3.0 should be technically capable of handling this drive. If you are unsure of the differences between Type-A and Type-C connectors, please see the image below. 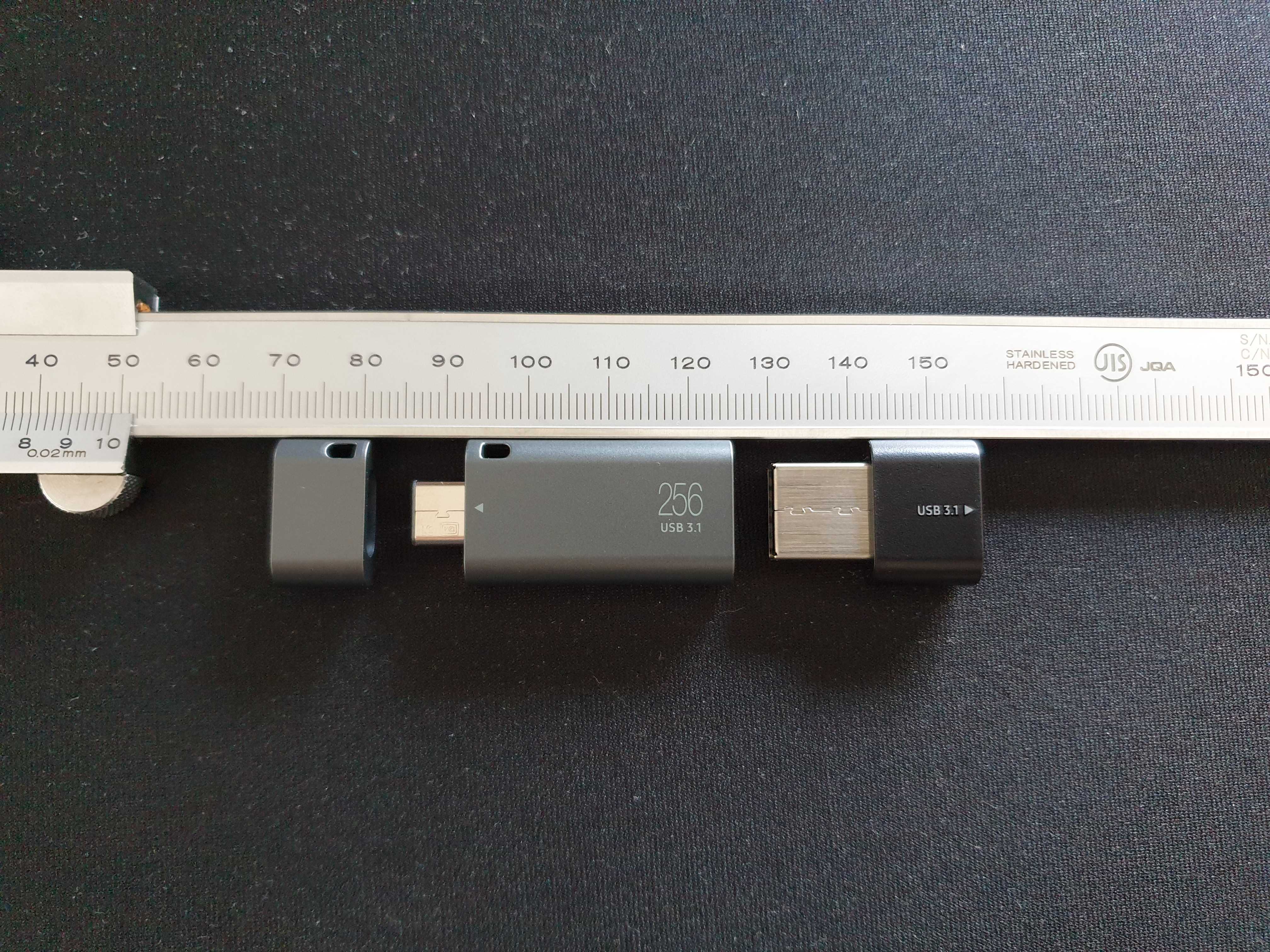 Here you can see the drive with the main cap (left) removed, and the Type-A adapter (right) removed. In the center, we see the Type-C connector.

This test was performed over USB 3.0 Type-A.

About half way through formatting, I noticed that the drive was hot to the touch. The aluminium shell is helping to dissipate the heat output, but it's not built for endurance work, which makes sense given how small this USB stick is. In spite of the heat output, the USB stick managed to perform the full format without throttling in a room at 22 °C. Whilst the drive pretty much maintained a 120MB/s write speed, it would dip to 90MB/s just for a moment, and it would do this roughly every 15 seconds; this occurs on all connection types. I think this is by design and not a throttling issue. Considering that it took 36 minutes to format, that gives us an average write speed of 113MB/s over the duration, and this agrees with the results from CrystalDiskMark as seen later. I'd say it's built well enough for a USB stick, considering the size. You can write the full storage in one go, but it gets hot.

The write speed would dip to ~90MB/s for a brief moment, and it did this roughly every 15 seconds as seen on the graph.

To test this, I placed a 32GB file onto the empty drive and then duplicated it.

Over USB 3.0 Type-A, the process took 8 minutes and 58 seconds, which equates to 61 MB/s on average. This does not vary with the free space on the drive.

Over USB 3.1 Type-A, the process took 8 minutes and 48 seconds. This was not tested with varying free space, and is assumed constant as for the above result.

Over USB 3.1 Type-C, the process took 8 minutes and 48 seconds. As above, this was not tested with varying free space.

Next, I placed the drive in front of an air conditioner to cool it down, and then gave it another 10 minutes before testing with CrystalDiskMark. I wanted to test performance with varying amounts of free space, including 128GB, 64GB and 32GB. This was done over USB 3.0 Type-A.

I created dummy files and copied them onto the drive to create the differing amounts of free space for each test. For each test, I used the default settings for CrystalDiskMark 6.

We have established that performance does not vary with free space. The next test was to see how performance varies with the connector used.

The sequential reads are notably faster using the Type-C connection directly, and all of the random results are faster with either USB 3.1 connection, but most notably with the writes. Sequential writes are equal across all three connections. Overall, the direct Type-C connection over a 3.1 port provides the best performance.

The Type-C to Type-A Adapter

This drive has an attached Type-C to Type-A adapter, which was a selling point for me. I wanted the drive to easily work with my phone and tablet and whatever else I get that uses Type-C connectors, but also to function with my existing Type-A devices. Whilst Type-C is generally a reversible connector, I've seen complaints online stating that the included adapter must be used a specific way around to avoid performance issues. This is in fact true.

When reversing the adapter, my performance results were drastically lower than when using it the correct way around. I measured sequential reads of only 42MB/s with writes of 33MB/s. This is not a terrible issue, but it is something you should be aware of, and Samsung did not make it clear. I don't see a related warning anywhere on the packaging. Once you know about this issue, you will understand that the two small arrows on the drive itself and the adapter should meet each other, as this indicates that the adapter is being used the correct way around. 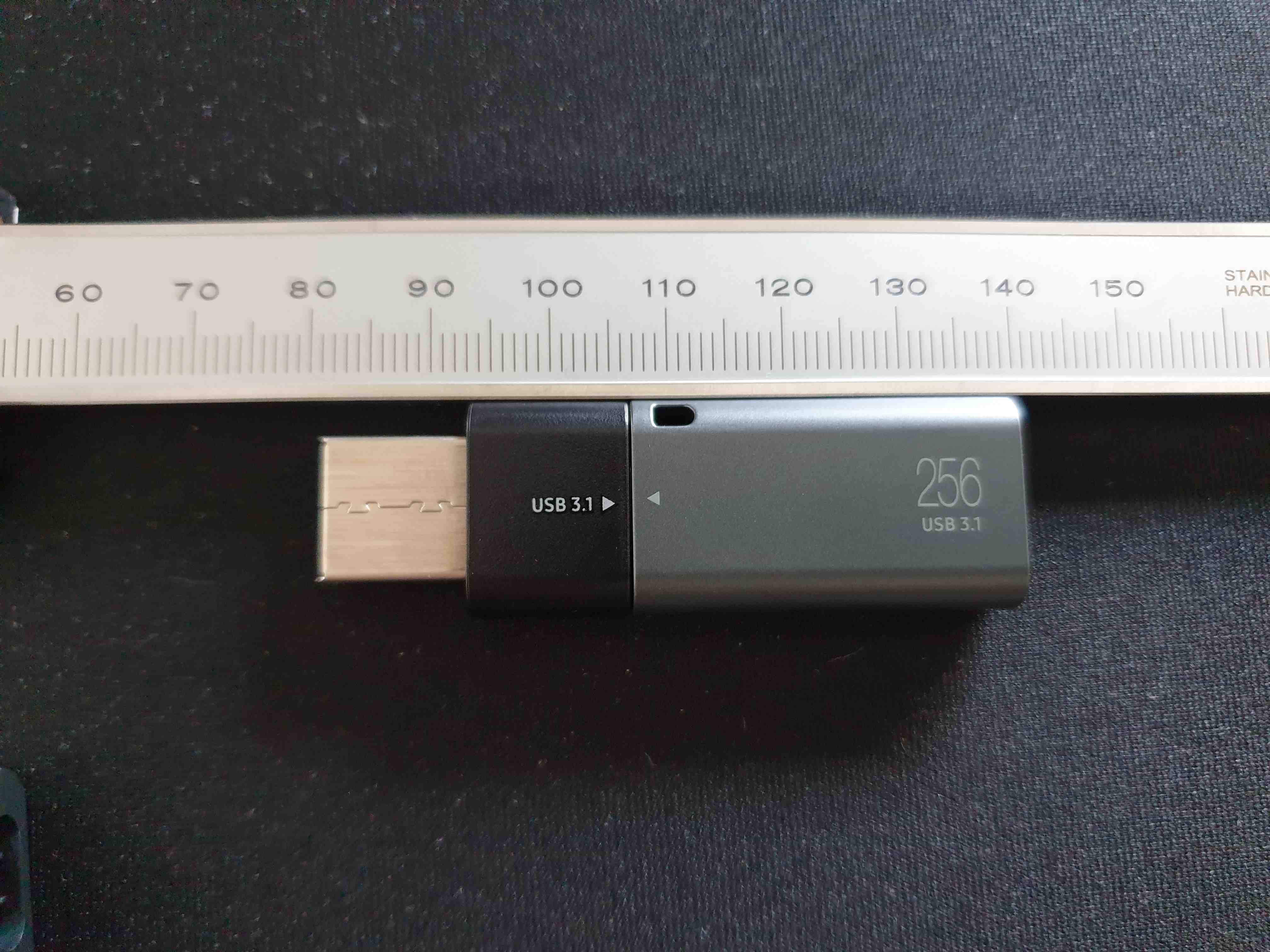 The correct way to use the adapter - showing the arrows.

The correct way to use the adapter, showing the reverse side with the Samsung logo. 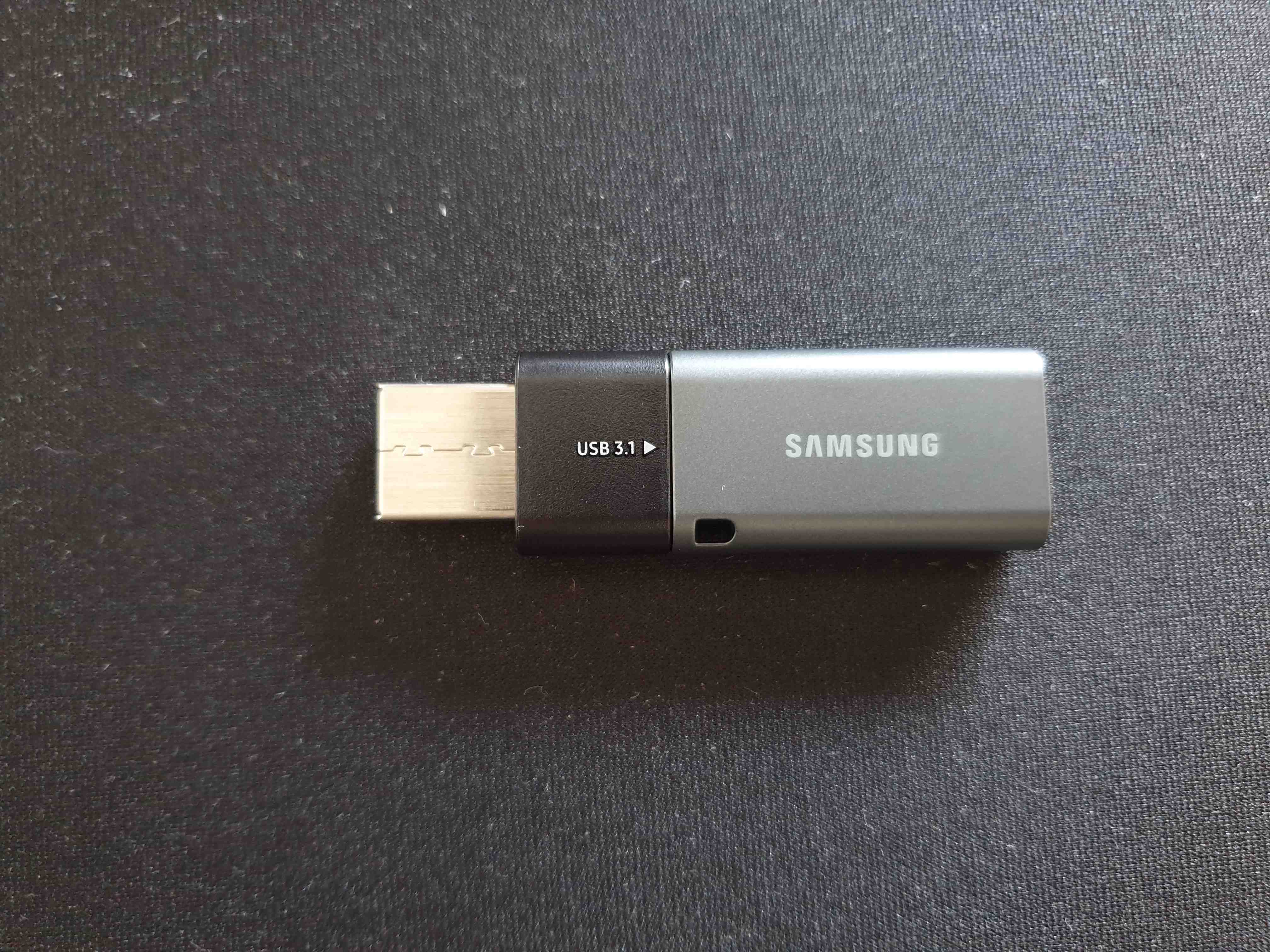 The INCORRECT way to use the adapter - this performs poorly.

Another Note on Reversibility

When testing this drive with my Note 9 Exynos phone, it only worked one way around. After some googling, I found similar complaints from S9 users, so it could be an issue with that generation of smartphone. I also tested it with my Galaxy Tab S7+, and my USB 3.1 Type-C port on my desktop (Intel Z370 Chipset), and it worked great both ways around.

This drive is very handy and performs well under testing. I paid just under £40, and personally I feel it is a fair value. Performance is good using all connection types, so long as you remember to align the adapter correctly. The sequential reads are notably faster using the Type-C connection directly, and all of the random results are faster with either USB 3.1 connection, but most notably with the writes. Sequential writes are equal across all three connections. Overall, the direct Type-C connection over a 3.1 port provides the best performance.

What matters most with a USB drive is the sequential read/write speeds. As the direct Type-C over USB 3.1 provides the greatest read speeds, you should prioritise this connection where possible. The random results are not of much significance unless you run applications from this storage device, which is doable as these speeds are 20 to 30x what you get with an HDD, but SSDs will perform even better for that.

All in all, it works quite well any way you use it, so long as you use the adapter correctly, and it's nice having the one device that can connect over both Type-C and Type-A connectors, helping to bridge the gap between your devices.